See how high-efficiency equipment helped the nonprofit earn more than $60,000 in incentives.

Savings at a Glance

By participating in the BGE Combined Heat and Power program, Columbia Association was able to take advantage of financial incentives to install a combined heat and power system in a 24-hour sports complex.

In 1967, a forward-thinking developer broke ground on a brand-new community 20 miles south of Baltimore. The development would be a complete city with a sound economic base and housing to match the incomes of those who work there. Further, it would respect the land, provide for the growth of its residents and make a profit. Now, 50 years later, Columbia, Maryland, has about 36,000 homes and apartments and is living up to its founders’ aspirations, topping Money magazine’s 2016 list of the best places to live.

"Intrinsic in our operations is a progressive view toward sustainability," says Jeremy Scharfenberg, CA's energy manager. That’s one of the reasons the association has been an active participant in BGE's Smart Energy Savers Program® for years, investing in upgrades to improve the community's energy efficiency and save money.

One of CA’s earlier upgrades was installing energy-efficient lighting in the weight room. 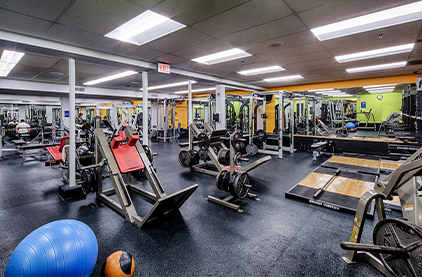 The new generator sits outside the facility, while a new pump and heat exchanger were installed in the existing mechanical room.

Through our research, we found that a CHP system would be a cost-effective and impactful project. The payback was good. It was a no-brainer to move forward on it.